Physical Therapy EMR Migration | Strategies and Tactics to Get You Going 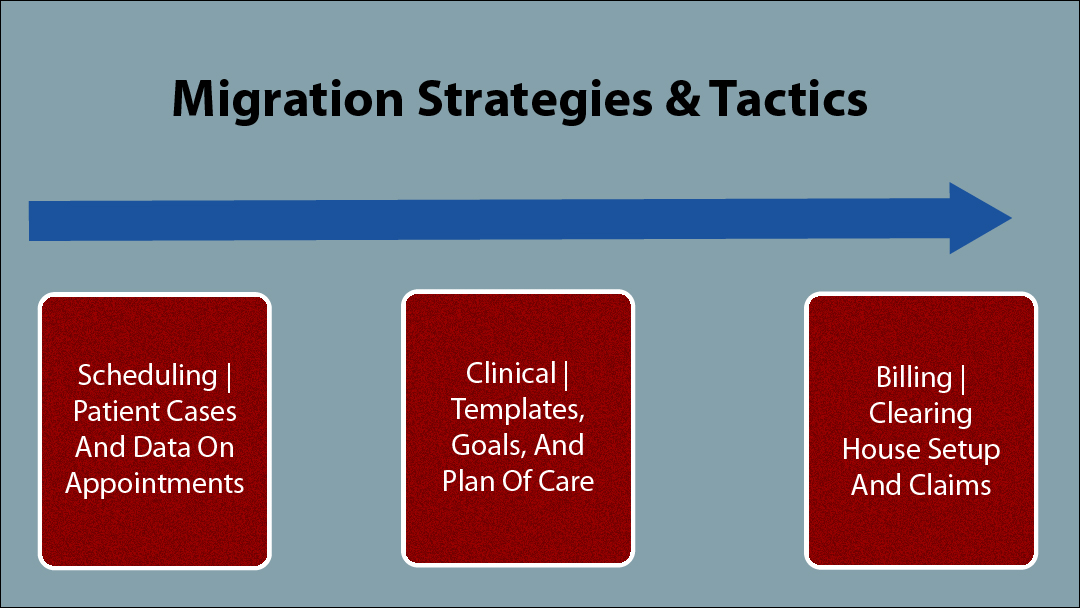 Physical therapy EMR migration time is here. What next?

What are the best strategies for the transition?
What is the right timeline?
When should the plug be pulled on the old EMR?
How do we ensure that we do not lose any work or data during the migration?

Lots of questions that could come up.

It might make sense to look at it from the perspective of the three stages: appointment scheduling, documentation, and billing.

During the transition phase, the goal would be to go live in the new system. We would need to have a few weeks of upcoming patient appointments data transferred into the new EMR. However, past appointments data may not need to get migrated.

Also, patients’ insurances and cases would need to be set up in the new physical therapy EMR.

The clinical part of the physical therapy EMR migration should be easier to handle. Clinical notes may not always get imported into the new EMR. Therapists would need to review their active caseloads for a typical one-to-two-week period.

First off, goals would need to be entered beforehand. The steps would include:

Moving all the old documentation into the new EMR may not be required. Instead, this data would need to be appropriately stored: in online HIPAA compliant storage or onsite in secure, compliant storage.

Setting up new clinical templates would be a key part of the implementation process. The objective would be to raise documentation efficiencies in the new physical therapy EMR while preserving some of the unique practices that enabled the delivery of patient value. A master template that serves as a common template for the clinic could provide a useful starting point.

During the transition, therapists would need to get a sense of existing patients’ goals and/or their plans of care. Next would be to get that set up in the new EMR. Therapists could then go and check out the patient records in the new EMR and start to get familiarized with it.

Billing would be the most complicated part of the transition. Each clinic would have its own unique billing issues to deal with. At a high level, the process could be summed up as:

In the beginning, the clinic would be working off two different billing systems in the old and new EMRs. For all checks that were sent out from the old EMR, it may be necessary to manually download the remittances for those checks in the new clearinghouse setup and proceed to manually post them into the old EMR.

The objective would be to clear out all old Accounts Receivable in the old physical therapy EMR. Once that is all cleared out would be the time to decide whether to retain a single active license of the old EMR. Using two EMR systems in the transition period until all AR is cleared out would help get a runway that would be vital for a change of this magnitude.

Once all the clearinghouse setup is moved over, the new EMR would start to work with full efficiency. A cutoff date for switching over to the new system would provide a deadline and inject additional project momentum.

To sum up, here is how it should pan out:

When the new EMR detects patient charges and claim numbers (for older billed items) that do not match with claims generated in the new EMR, it would likely ignore them! Clearing out the old AR would take the following steps:

Some amount of manual work to clear our AR in the old system would be inevitable. An overlap of a month or two with the old EMR would help zero down the AR. For this, retaining a single user license of the old EMR would necessary.

Once the parallel runs are completed, the old EMR could be finally shut down and then it would be all systems go in the new one! It should be back to life as usual for the clinic with hopefully some significant efficiency gains to show for the effort and investment!